Get a quote
Menu

Structural foundations are an integral part of any building. Whether it is a residential home or a commercial structure, the foundation must be in place to provide stability and strength. In this article, we’ll discuss the purpose of structural foundations and the different types available in today’s market.

We’ll start by discussing why having a strong foundation is so important for any construction project. Foundations help support heavy loads from above, prevent soil erosion and provide stability against lateral forces such as wind or seismic activity. We’ll also discuss the different types of structural foundations available. Finally, we will look at some tips for choosing the right type of foundation for your project based on its specific needs. 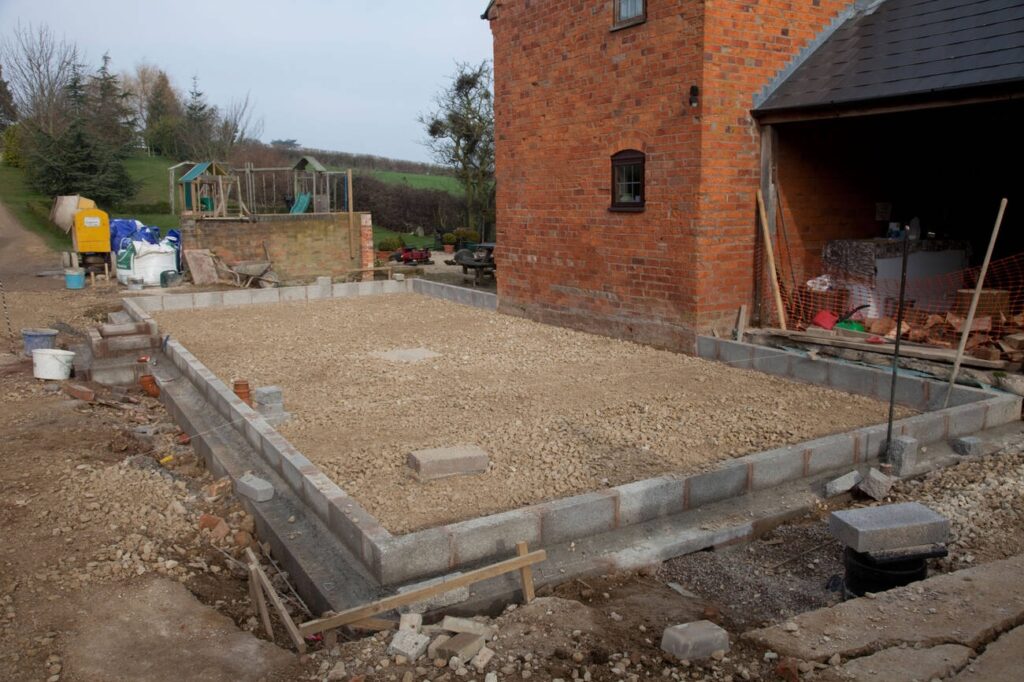 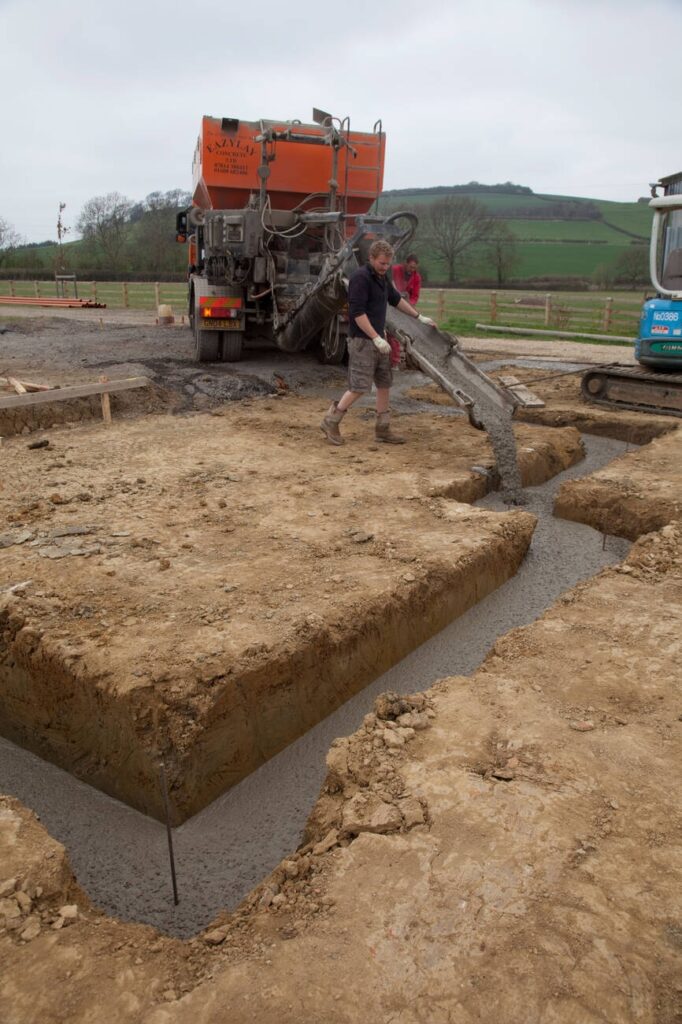 What is the Purpose of foundations?

The purpose of a foundation is to transfer loads to the ground without any subsidence or settlement, and thus ensure the building remains stable. The foundation will exert a bearing pressure on the soil and the soil will have a bearing capacity which it can sustain. 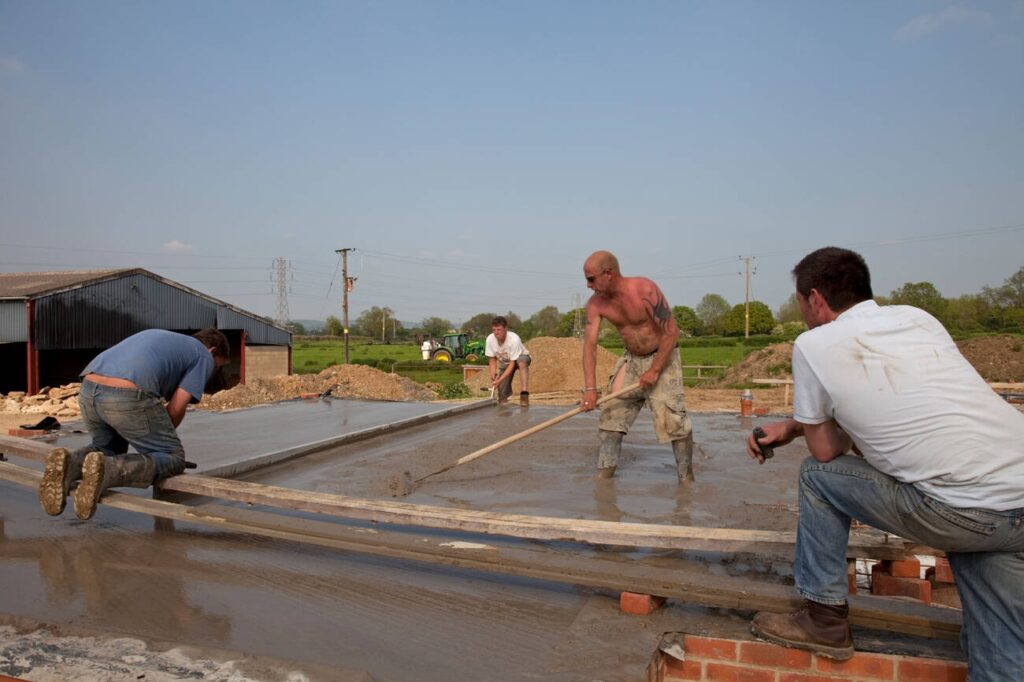 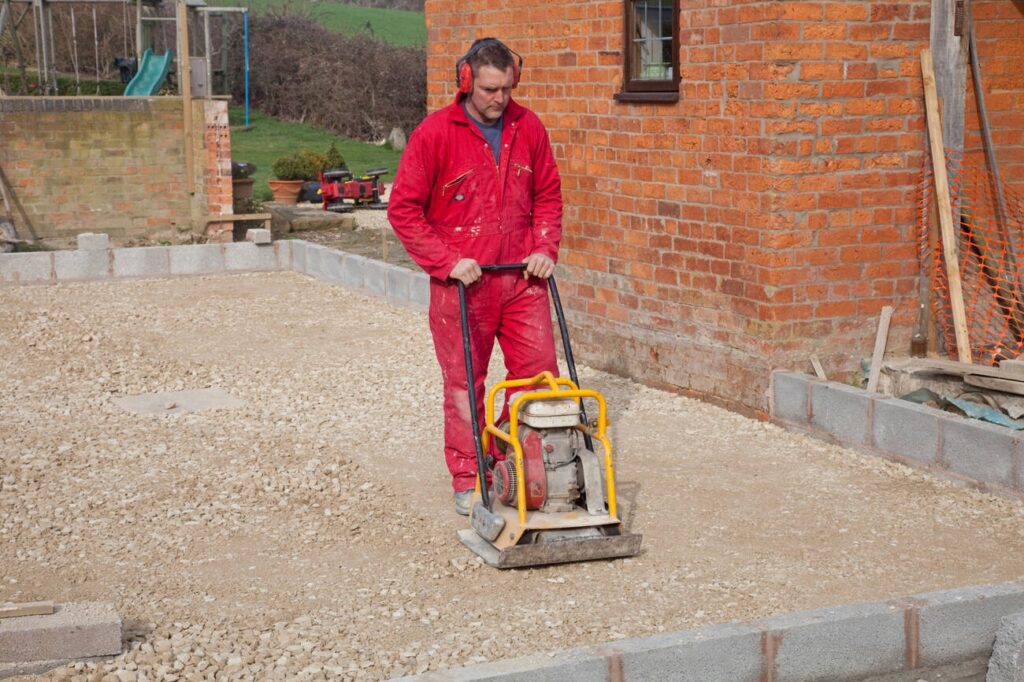 Regulatory Requirements for Foundations in Construction

Section 2E of Part A1,2 of the Building Regulations focuses on foundations and states that “The building shall be constructed so that the combined dead, imposed and wind loads are sustained and transmitted to the ground a) safely; and b) without causing such deflection or deformation of any part of the building, or such movement of the ground, as will impair the stability of any part of another building.

“The building shall be constructed so that ground movement caused by

a) swelling, shrinkage or freezing of the subsoil; or

b) landslip or subsidence (other than subsidence arising from shrinkage, in so far as the risk can be reasonably foreseen), will not impair the stability of any part of the building.”

Foundations should be located centrally under all external and internal walls and taken to a depth below the influence of drains and/or surrounding trees and taken to natural undisturbed ground of adequate ground-bearing capacity.

The Regulations also prescribe the concrete mixes suitable for foundations – either a Grade ST2 or Gen 1 concrete mix complying with BS 8500-2 should be used. Alternatively, in proportion of 50 kg Portland cement to not more than 200 kg (.1 cubic meter) fine aggregate and 400 kg (.2 cubic meter) coarse aggregate.

The minimum thickness of a foundation should be 150 mm, or the thicknesses as outlined in Table 10 of Part A1/2 of the Building Regulations, whichever is the greater. The Regulations base the dimensions on strip or trench-fill foundations.

When strip or trench-fill foundations have to be stepped, there are strict criteria under the Building Regulations that need to be complied with so as to prevent shear failure in the concrete.

The most commonly used type of foundation is a shallow foundation; this is typically used for smaller buildings such as single-family homes or small garage structures. It involves digging down into the ground to create a firm base that can support the weight of the structure above. This type of foundation requires less excavation than others and has lower material costs, making it an ideal choice for those on a budget.

Shallow foundations consist of strip, trench fill, pad and raft foundation depending upon the soil condition and load requirements. Strip footings are most commonly used in residential construction. Early strip foundations were constructed of brick or stone, widened at the base of the wall to distribute the load of the wall over a wider area. This was a technique used in Victorian and Edwardian properties. The foundations were typically constructed at a shallow depth, possibly no more than 450–500 mm below ground level. The wall would thicken below the ground surface, corbelling the stone or brickwork to a width that would ensure the load could be sustained by the receiving soil. Strip foundations are used to sustain line loads and are shallow. Since the 1900s concrete has been used and typically a foundation will be a minimum of 150 mm deep (usually 225 mm) and 150 mm wider on each side of the wall.

The depth from ground level to the bottom of the foundation is important to ensure that the foundation does not experience movements in the soil due to climatic changes such as heat, frost and moisture changes. Except where strip foundations are founded on rock, they should have a minimum depth of 450 millimetre to their underside to avoid the action of frost – except in clay soils where this is increased to 750 millimetres to avoid the influence of vegetation. However, these are minimum values and will normally need to be increased to transfer the loads to suitable subsoil.

Trench-fill foundations are trenches with a minimum width of 450 mm. When excavated the sides are trimmed, and prepared and then mass concrete is poured into the trench, levelled at the top to receive the wall construction. This type of construction can be quicker than strip foundations, since there is a labour sabing in the construction of subsurface walls. Concrete mixes for strip and trench-fill foundations are generally ST2 or Gen 1 mix. ST2 is a standard mix consisting of 4–20 mm stone, graded sand and water. BS 5328: 1 ST2 has a compressive strength of 10 Newton/square millimetre. Gen 1 is a designated mix. BS 5328:1 Section 5 specifies the mix. The mix strength is also Newton/square millimetre.

Pad footings can be used for columns that carry heavy loads while raft footings provide full bearing capacity on weak soils or there is a likelihood of differential settlement due to changes in the soil or moisture. Raft foundations spread the load over the area of the slab, thus reducing the bearing pressure to the ground. This is achieved through reinforcement of the slab.

The extraction of moisture in clay soils can lead to volumetric changes in the soil, thus a raft foundation can be used to ensure any depressions or downward movement of the subsoil can be accommodated, or the voids spanned by spreading the load of the supported structure over a wider area. Ground heave is caused when clay soils rehydrate, causing the clay to swell and push on the underside of the foundation. In these circumstances a reinforced concrete slab can be employed which is suspended from a boot or edge beam, thus creating a void beneath the slab. The void is high enough to accommodate any movements in the ground. Products are available which overcome the effects of heave and can comprise a moulded hexagonal cellular polystyrene void former which is placed on the prepared ground. The reinforced concrete is poured over the product, and this supports the concrete until it sets. The product is available in different grades and each grade is designed to support a safe working load for a period of approximately 16 hours. After this time the material disintegrates, and the slab remains suspended; thus, the ground beneath can rise or heave without adversely affecting the structural integrity of the slab.

Different types of raft foundation, slab raft and boot raft, will depend on the line load along the edges and the spans required.

Slab Raft This comprises a flat slab which can be reinforced at the top only or the top and bottom depending on the tension forces anticipated in the foundation and the particular conditions the slab has been designed for.

Boot raft the boot design will allow a step to hide the outer skin of brickwork in the ground. Boot rafts can be tapered or square on the underside and usually require reinforcement shear links.

The strength of the concrete used will depend on exposure and loading, but generally an RC35 mix is suitable. This is a ready-mixed concrete specified in accordance with BS 5328:1 Section 5 and is used for reinforced concrete. The numbers relate to the strength of the mix and in this case the mix will have a compressive strength of 35 Newton/square millimetre.

Deep foundations are an essential part of the engineering process that allows builders to construct larger, more complex structures on land with limited bearing capacity. Deep foundations transfer loads from a structure to a firmer soil or rock layer at greater depths. Understanding the purpose and type of structural foundation is important for proper design and construction.

There are several types of deep foundation systems depending on the requirements of the specific project.

Piles have been used in construction for many years. The Romans used timber piles in the construction of the first bridge across the river Thames in 60 AD. The Royal Palace in Amsterdam is constructed using timber piles. In the UK, the most common timber used for timber piles is Douglas fir, although other timbers such as oak and elm are also suitable.

An end pile will be placed at a depth where there is a more stable stratum of soil and transfers the load to this soil stratum.

This pile transfers the load via friction from the side of the pile to the subsoil.

This type of pile will be driven into a lower, harder material but also relies on frictional resistance or enlarging the base to improve the bearing capacity.

Whether you are building a residential, commercial or industrial structure, the foundation is the most important element. A structural foundation supports and bears the weight of your building, making it critically important to select one that is appropriate for your specific needs. It’s essential to understand both the purpose and type of structural foundation necessary to ensure its stability and longevity.

A structural foundation must be designed in accordance with local regulations, codes and industry standards. Factors such as soil type, soil bearing capacity and climate must be taken into account when selecting a suitable foundation design. Consideration should also be given to cost-effectiveness, drainage requirements and even aesthetics if relevant. A professional engineer will use this information to create an appropriate plan that meets all safety requirements while providing long-term stability for your structure.

Without proper bearing pressure, the soil may not be able to adequately carry this burden and could cause serious damage to the foundation and any structures built upon it.

The bearing pressure of a foundation depends on two factors: its depth and soils strength. A deeper foundation will generally have better bearing capacity than one that is shallow, as deeper soils are less affected by weathering or other environmental conditions that may weaken them over time. Additionally, stronger soils such as clay or gravel tend to have higher bearing capacities than softer soils such as sand. 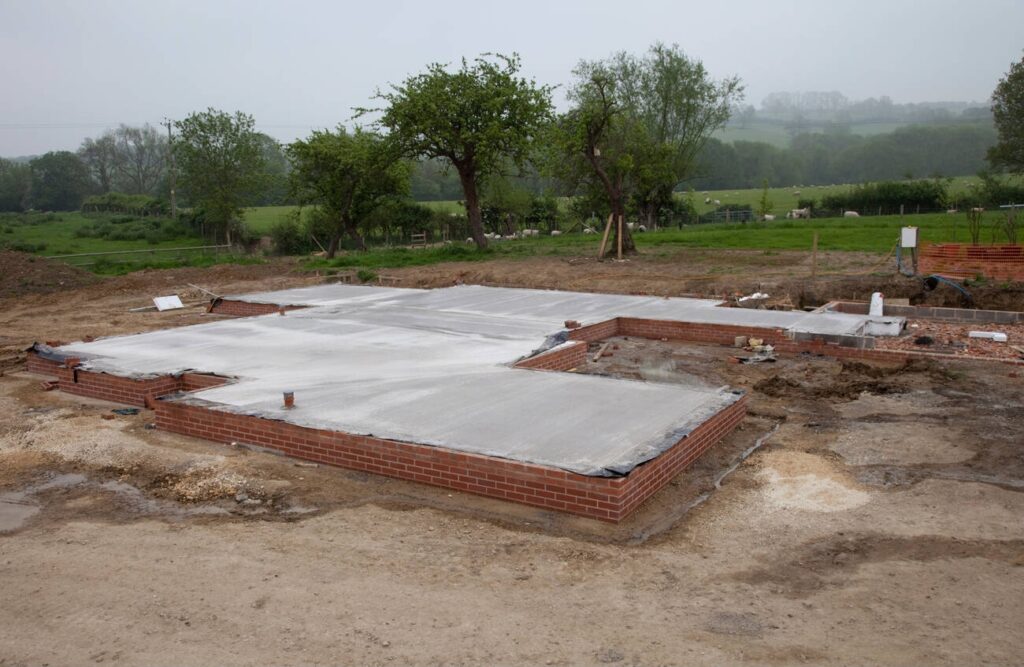 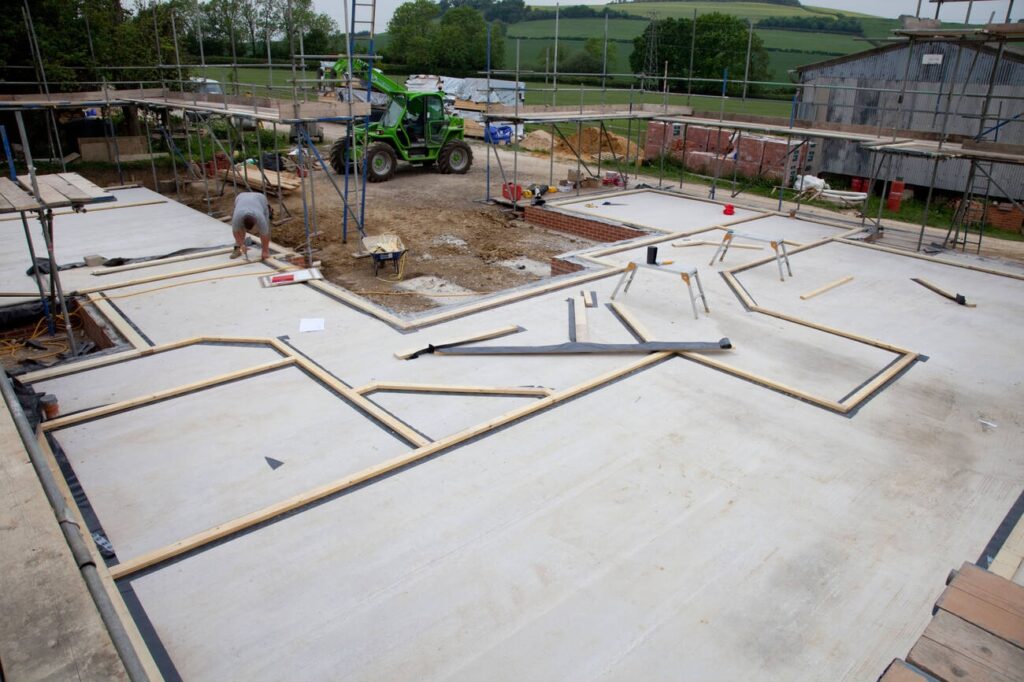 Every project needs a strong foundation, so it’s important for builders and designers to understand the purpose and types of structural foundations. There are many factors to consider when choosing the right type of foundation for a project. The following tips will help you choose the appropriate type of foundation based on its specific needs.

The first step is to determine the soil condition at your construction site. Different soils have different composition and bearing capacity, which affects what type of foundation is suitable for your project. If soil conditions are bad, deep foundations such as piles might be necessary; if they are better, lightweight foundations such as slabs or shallow footings may be sufficient. Additionally, assess whether there are environmental factors like earthquakes or high winds that could affect your choice in foundation type.

Our team is available to support you!

We welcome the opportunity to consult with you, Contact us for a free consultation.