Portal frames are a simple and very common type of framed structure. Steel portal frames, in particular, are a cost-effective structural system to support building envelopes (such as warehouses and shopping complexes) requiring large column-free spaces.

In general, the loads and consequent deformations for these frames are in the plane of the structure, and hence these are a plane frame structure. Due to the practical requirement of having a clear space between the supports of a portal frame, providing in-plane bracing is generally not feasible. Consequently, these frames undergo larger deflections and are subject to sway laterally, even under the vertical loads.

Thus, in spite of the inherent simplicity of portal frames, many aspects of their analysis, design and detailing require careful consideration. Portal frames can be made from concrete, timber and even glass but the vast majority are constructed from steel.

Steel portal frames usually have pinned bases and moment connections at the column/rafter interface and mid-span apex splice in the rafter.

Steel portal frame structures provide an efficient and cost effective means of creating large column-free spaces. As such, this type of structure is used for depots, warehouses and out-of-town shopping complexes.

Portal frames are subject to a significant amount of movement and therefore second order effects. It follows that the deflection limits for portal frames are less onerous than for other structures. As a result, any cladding system affixed to them needs to be able to accommodate more movement than a conventional building.

Steel portal frames typically span between 15-50m with a height ranging between 5-15m. The roof pitch is typically set to 5-10º with portalised bays at 6-8m centres longitudinally.

The anatomy of a steel portal frame can be broken down into four key in-plane components:

The eave and the apex joints are commonly designed to carry moments. In order to increase the stiffness of these joints, stiffening plates (haunches) are used. For practical purposes, these joints can be idealised as rigid joints. While these rigid joints reduce the deflections in the portal frame (as opposed to non-moment carrying pinned joints), due to their large spans the extent of displacements under the loads is relatively larger for the steel portal frames. Therefore, the serviceability criteria dictating the maximum permissible deflections are somewhat less onerous than usual.

With connections needing to carry a significant bending moment, it is often necessary to provide some form of stiffening to the elements. This typically takes the form of haunches, which are either a cut section from the elements they are stiffening or fabricated plates. The required size and extent is dependent on the applied bending on the portal frame, but in practice haunches typically take up 10% of the portal span of the rafter element, which will optimise the efficiency of the unstiffened length of the rafter. 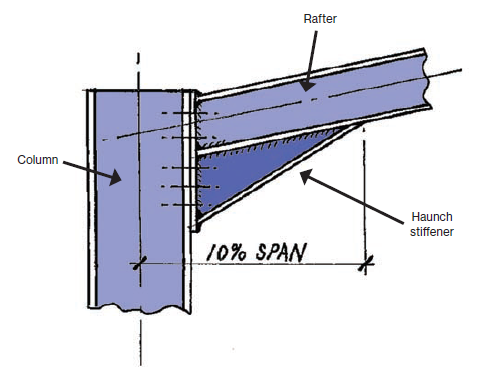 Steel portal frames made from open sections are vulnerable to lateral torsional buckling as they are placed under load. Cladding rails and roof purlins provide restraint to these primary elements. They are typically made from cold formed thin gauged steel rails and span between portal frames.

It is more often the case that while the rafter is restrained, the column is not. This is due to the lack of continuity of the rails in the external walls of the structure owing to the presence of large door openings in the wall cladding. In such instances the unrestrained span of the column is taken from its base to the connection with the rafter. Thus, the columns are vulnerable to both lateral torsional and Euler buckling. 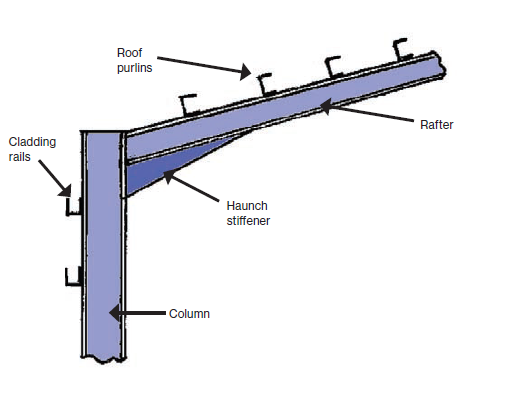 The rails only provide direct restraint to the outer compression flanges of the rafter/column. With the ever-present risk of bending moment reversal due to negative wind pressure, there is a requirement to provide restraint to the inner flange (especially to the rafters). This restraint, commonly known as ‘fly bracing’ comes in the form of two flat plate strips that are fixed at 45º from the cladding rail to the inner flange of the primary steel element. 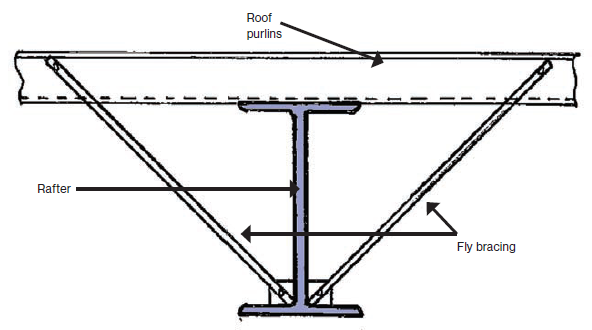 Steel portal frames are statically indeterminate structures. It follows therefore, that some assumptions on the relative stiffness of the members within portal frames are required, in order to calculate the induced stresses within them. As a preliminary guide it is reasonable to assume that the second moment area of the column is 1.5 times that of the second moment of area of the rafter element.

Another reasonable assumption is that the highest bending moments in a portal frame are generated from applied vertical actions, such as self-weight, wind and snow. During preliminary design it is generally acceptable to account for second order effects by increasing the applied bending moment by 15%.

Elastic Design of Single-Span Steel Portal Frame Buildings to Eurocode provides design formulae for steel portal frames. It advises that to determine approximate bending stresses in a steel portal frame, the following formulae can be used:

The sizing of the rafter and the column should be based on the design of steel beams and columns.The rafters should be designed assuming that there is a minor axis unrestrained length between two consecutive cladding rails. Columns should be designed based on the overall height of the element. The shape of the bending moment diagram impacts on the design of both the rafter and column. Elastic Design of Single-Span Steel Portal Frame Buildings to Eurocode advises that the rafter design should assume a value of 1.0 for C1. With respect to columns, the value of C1 should be set at 1.77 due to the triangular shape of the bending moment diagram.

There are two methods of analysing steel portal frames: elastic and plastic. The elastic method assumes that the structure does not undergo permanent inelastic deformations when placed under load. When subjected to normal gravity loading, the resulting bending moment profile has a hogging bending moment at the eave joint of the frame and a sagging moment in the rafter apex joint.

Subject to certain conditions, it is permissible to re-distribute up to 15% of the maximum bending moment within the portal frame when using elastic analysis. 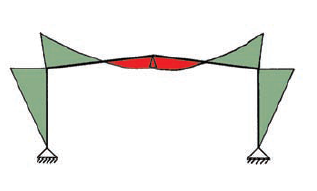 No more than three plastic hinges with pinned baseplates (or four with fixed baseplates) are formed. Otherwise the structure becomes an over-complete mechanism, as a portal frame has a single degree of indeterminacy when it has pinned baseplates. However, the location of the middle hinge near the apex of the rafter cannot be pre-determined.

Therefore, it is assumed that one will form either side of the apex for the purposes of analysis. It is for this reason that four plastic hinges are shown, with the two closest to the apex being possible locations for a plastic hinge. 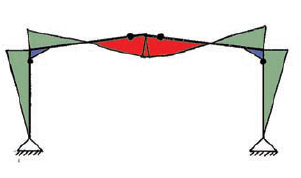 These second order effects can be split into two distinct categories: 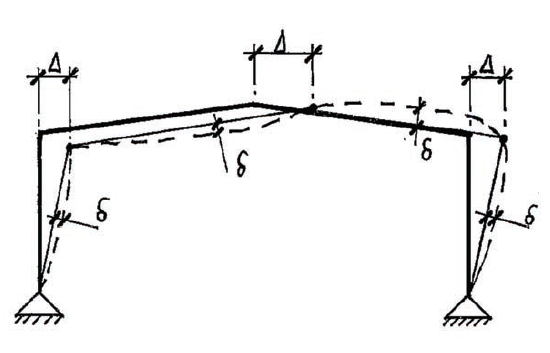 Parameters which can be used to determine the significance of the second order effects in the analysis of steel structures. The factor acr is the ratio between the elastic critical buckling load Fcr of the structure for global instability and the applied design load FEd.

Second order effects are deemed not to be significant when acr satisfies the following:

For elastic analysis: acr = Fcr / FEd equal or greater than 10

For plastic analysis: acr = Fcr / FEd equal or greater than 15

Steel portal frames are typically modelled as having pinned supports at the column base, but in reality, the base has a nominal stiffness, acting more like semi-rigid supports than pure pin supports. Generally, bases are typically formed of an unstiffened baseplate that has four holding down anchors fixed into the foundations.

By taking into account this additional stiffness, it is possible to reduce the second order effects due to deformation of the portal frame as it deflects under load. It is generally accepted that 10-15% of the applied moment can be taken. 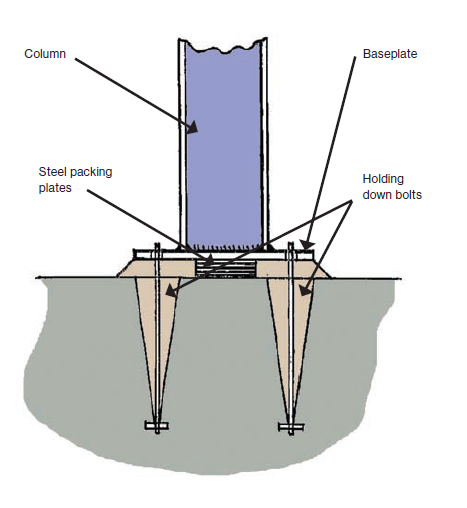 To establish a reasonable deflection that can be safely permitted depending upon its support conditions. Such limits must be agreed with the rest of the design team and the client. As with most serviceability limits, only the unfactored imposed load/characteristic variable action is considered while calculating the deflections of a steel portal frame.

The lateral deflection limits are largely dependent on the cladding materials that make up the walls of the structure. This can vary from metal sheeting to precast concrete units.

Type of cladding – Deflection at eaves of steel portal frame

b is spacing between steel portal frames

s is the length of rafter

The calculated deflections are those due to: